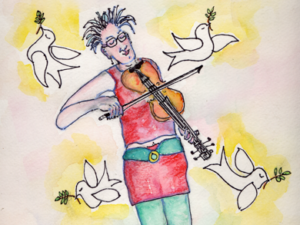 On Saturday while we were having a business networking meeting with young women (ages 14-24) who want to spend their time bringing music to the world, a disturbed young man with a head full of vitriol and conspiracy theories was gunning down a group of people, including a 9 year old girl, at a political event in Arizona.  This horrible occurrence and our response to it take me back to the days following the terrorist attack of September 11, 2001

Shortly after 9/11, I found myself increasingly alienated from the national response of flag waving, finger pointing and saber rattling.  I knew my estrangement was not helpful and began to listen to a yet small inner voice reminding me that everyone was afraid  just like me and,  just like me, was responding from a need to feel safe.   I decided then that it might be most helpful if I were to learn to step outside of this cycle of violence.  Interrupting my own “fight or flight” response by noticing when it was happening was where I began.  That year, the image I painted for our IMA thank-you card at Christmas time was of a woman playing guitar with doves bearing olive branches flying outward,  I called it “practicing peace”.  There are now 10 in the series.   What practicing peace means has continued to evolve, but quieting my fearful mind and directing it toward compassion remains essential.  My hope is that we all take this most recent tragedy as an opportunity to begin or to deepen a practice of peace.

P.S. As I stand back and look at all 10 watercolors, I realize that my artistic ability has evolved as well.  Bonus.