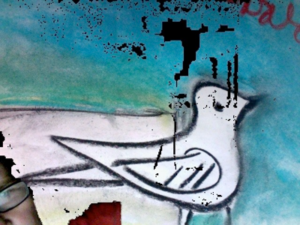 When I was around 12 years old, I was left home alone at night.  I’m not sure how often or for how long; it was probably just for a couple of hours in the winter when it got dark earlier. My family was sort of falling apart and I didn’t want to be the problem so I pretended to be okay with being home alone, but I was often scared.  Inevitably there would be a frightening noise and  I would end up going through the house brandishing a long shish kabob skewer.  I’d go through every single room, even the scary furnace room, turning on the lights, opening every closet, looking anywhere someone might be hiding.  Eventually, though, I found cigarettes and instead of going through the house to track down and face the thing I feared, I took up smoking.  Soon, I buried my fear and began to look forward to being left alone so I could smoke.

For a long time, I forgot about that little girl with the shish kabob sword.  She disappeared behind the veil of smoke that has taken a good thirty years to clear.   I think about that child who knew the best thing to do with fear is to face it, to go right up to those dark places, open the door, turn on the light and look in.  I wonder where I would be today if I had let the lesson settle in back then.  I hope to find out by watching the girls  whom we encourage to stand and face their fear, to open the door  and to let the light in.

Our intent at IMA is to hold the space so that those who come here feel safe to tap into their most authentic  selves as they create their music.  Despite initial evidence to the contrary, one of the first obstacles to creating from the true self is the use of alcohol and other controlled substances.  Most addicts pick up their habits young, which is why it’s such a good idea to address the choice early.  Many adults have built their lives as artists with the aid of controlled substances and rely on them to feel okay in the world.   Therefore, any kind of “zero tolerance” or “no drugs or alcohol” policy is neither effective nor desirable.  It does not create a sense of safety for those who are already engaged in addictive behaviors; it simply encourages hiding, avoidance, or a form of boundary testing that puts us, as Directors, in a tedious enforcer position.

Our drug and alcohol policy for IMA’s summer programs states:  If you are using them, leave ’em at home. We wish to work with your most authentic self, and we’re all about finding creative ways to do that. It has been our experience that the use of drugs, alcohol and tobacco, and even sugar and caffeine, eventually impair access to what is really going on inside ourselves – the same with binging and purging of any type. We recognize that you may be on medication prescribed by a doctor and are not suggesting that you leave that at home.

As children or young adolescents, the tools we pick up to manage difficulties are limited to the choices we see around us.  Sadly, our culture abounds with bad choices fostered by a narrow view of what it is to be “normal”.  The parameters of “normal” for females constrict the older we become.   The confusing reality of those limitations begins around age 10 and hits full force by age 13.  By the time girls enter high school they’ve gotten the message loud and clear: “Don’t take up too much space (i.e. be thin, be quiet, be passive) if you don’t want to get hurt.”  We learn quickly how to cut off our feelings and to kill our appetites, literally and metaphorically, in order to fit in.  Once this process begins we lose touch with the truth.  We start lying to cover up behavior that we intuitively know is wrong and soon lying becomes the norm.  The road back to our inner truth is sometimes hard to find and even more difficult to follow once we’ve built a life on our own self-denial.  So to be able to interrupt that behavior before it becomes habitual is critical during late childhood and early adolescence.

Both IMA co-founder June Millington and I have been on our own paths of healing, growth and spiritual development for a long time and we recognize that, while there may be common markers, the route is intensely personal and circuitous.  Our intent is to keep the energy at IMA as clean and clear as possible in order to encourage creativity.  The romancing of artistic creation in conjunction with a nihilistic self-destruction has left the art world littered with waste.  Whether compulsive behavior and addictions are an occupational hazard or a precondition for the artist is open to debate; either way, the uncoupling of creativity and self-destruction is part of the goal at IMA.

All this talk of creativity and self-destruction begs the question of absorption, transcendence, and/or enlightenment as primary motivators for creating art or participating in the artist’s experience.   There is the moment when the artist disappears into the music, the instrument, the ensemble, or the audience: the moment when the sense of self and other disappears.  The same is true for the audience members who lose themselves in the sound along with the artist and other listeners.   But the goal, the hope and the moment of losing the self within the creative act is not the same as destroying the self.  Self-destruction is often encouraged or at the least engendered when art and the artist becomes a commodity; spectacles of suffering are as sell-able as the promise of ecstatic experience.  Our intent at IMA is to provide a true ground that allows us to clear away obstacles to recognizing and creating from our true selves.   In other words, we intend to create a sacred space in which to rock and roll.

creating sacred space in which to rock ‘n roll: alcohol, drugs & the like